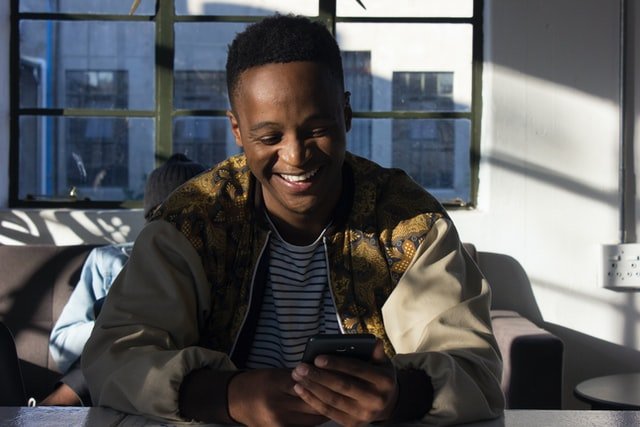 The ABPV app is a meme app published by Funtech Publishing LTD. The initials of the name stand for America’s best pics and videos. Upon reading America’s Best Pics and Videos app reviews on the Playstore, you might get the idea that the ABPV app is sketchy. Some users report inappropriate ads, push notifications, and content.

We downloaded and tested this app to see if this was true. We’ll guide you through our first impressions of the ABPV app. Then, we’ll discuss its features, content, and its user community.

I used a Samsung smartphone with an Android operative system for this test. I downloaded the app on the Google Playstore. The ABPV app features a logo composed of a white “play-button” outline on a red and blue background.

After completing a fast download, I opened the app. The app prompts the user with a dialogue box asking them to accept the “Privacy Policy”“. You’ll need to tap on “accept” to continue. Next, another prompt asks if you consent to the “Terms of Service”. You can either accept or decline this time: the app will allow you to continue.

Then, the app displays familiar interphases. A message reads: “Swipe while we do the rest!”. On first viewing, you swipe left to view new content: shocking images, funny memes, short videos, and sketches.

At the leftmost corner, there is a menu. You can switch between “Featured”, “Collective”, “Profile”, or “Add Meme”. I’ll tell you more about that in the sections of this article that discuss content and features.

I swiped through a few of the images and checked the basic features. Everything was quick and responsive.

Next, I closed the app and opened it again. A new prompt screen asked us if I identify as “male”, “female”, or “other”.  Then, the app asks us to select our age range.  After this the interface became a bit different. Instead of swiping left to reveal new content, you scroll down (as you would in most social media apps).

At first glance, this may be confusing. The app changes the interface according to the demographic profile of the user. To confirm this, I uninstalled and reinstalled the app. Once again, upon opening the app, I find the original interface.

This indicates that, depending on your gender and age, you may get a different display of features.

The ABPV has all the standard features of a content-based app. You’ll find the buttons for liking, disliking, sharing, and commenting.

When you look at the top-left corner of the screen, you’ll find the app’s hamburger icon. In this menu, you’ll find the following a few options: Featured, New, Explore, Profile, and the “Add Meme” button.

Remember, this app tends to change the interface in subtle ways. This means you may get different options on the menu. For this review, I’ll discuss the following basic items:

The app’s Play Store description states that ABPV curates the content using an algorithm. The selected memes and videos appear on the “Featured” feed. The collection includes 200-500 memes per day.

This feed is also called “Collective”. When the users upload their own media, it first appears in the Collective. Here, other users can comment on, like, or dislike the meme. The algorithm might pick it up and include it in the “Featured” section if it catches enough traction.

This section divides the content into different feed channels according to their subject. These include: “Animals”, “Videos”, “Babies”, or “Memes”.

Upon clicking this option, you’ll find a “sign-in” prompt. If you haven’t created your account, this prompt will also appear when attempting to use other features. You can sign in with an Apple, Google or Facebook account, as well as with an email address.

This function may appear as a “+” icon. Users can select an image or video from their phone’s gallery by tapping on it. The app will publish that media to the general collective feed, where other users can see it. The user needs to sign in with their account or create a new one to complete this action.

You also need to sign in to comment on a post, subscribe to other users, and hit the dislike button. But, sign-in is not required to hit “like”. You can do this by tapping the thumbs-up icon or double-tapping the image itself.

You can also access the comment section under each post without an account. If you wish to share a post with your contacts, you can tap the curved arrow icon at the bottom right of the image. This will open a panel: you can choose to share it via one of your messaging apps, or you can share the link of the image. You can do all this without creating an ABPV account. Yet, when your contact opens the link to view the image, a panel will prompt them to download the app.

So what kind of memes does the ABPV app provide? The content is the same as the kind of memes shared in Facebook groups or forwarded to family group chats.

Some common captions include:

Not all the content takes the form of traditional memes. One of the first pieces of content I encountered was a video clip from the official US Army TikTok account. It showcased military power edits with “bad-ass” phrases and rock music.

To access the comment section, I can tap the “text bubble” icon below the post or swipe up on our screen. Here, users share their opinions on the memes or crack jokes. Commenters are often from older generations such as Baby Boomers or Gen X.

The mature user base of this app makes up a community that shares and comments on memes to connect with their values. This is also evident from the “collective” feed. Here, memes feature Christian and conservative talking points. These are common to older members of many American families.

As notified in the Playstore description, this app does, indeed, contain ads. Yet, the advertisement-related content is clearly labeled. It does not feel intrusive in any way. The app does not cover up your screen with pop-up ads or send them to your push notifications.

Some users report receiving inappropriate content in the app’s push notifications. The notifications I received only included the same images as the “featured” section. This app holds a “T for Teen” rating. It includes mature humor and related content.

Is ABPV app safe to use? Yes. I even changed profile details like gender and age range in our little experiment. This was to test if any user demographics were targeted by suspicious accounts. I never encountered fake profiles or bots that would spam us with messages.

The only recurring pop-up panel I encountered was from the ABPV app itself. It asks the user to give it a rating in the app store. This is not uncommon for many mainstream apps. You can decline to rate this app, but the panel will reappear now and then.

The ABPV app is a content-based platform that aims to curate America’s best pics and videos. Does it achieve that? I say it does. With a 4.3 (out of 5) user rating, it’s clear it satisfies its niche audience of conservative Americans. ABPV doesn’t lack any of the essential features of a meme-based app. Users can access extra features by creating an account.

Is ABPV app safe to use? Yes. I found no suspicious spam or notifications during our test.

It’s the perfect app for those family members who like to forward you cute, funny images. It also encourages them to publish memes that reflect their own values.

How Does Postmates Pay? Here’s How Postmates Works

1 thought on “ABPV App Review: Is It Funny Or A Waste Of Time?”